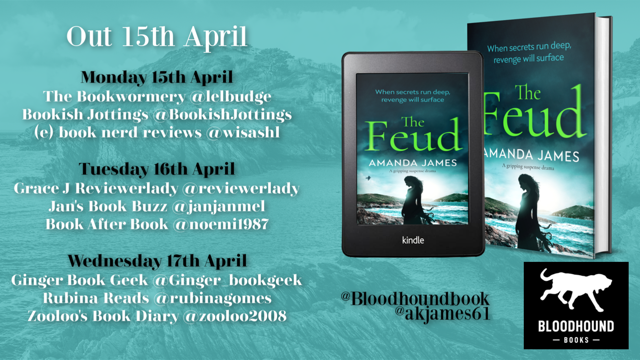 Matthew Trevelyar leaves his job in London to return to his Cornish roots in the village of St Agnes. After losing his wife to leukaemia, he wants to make a fresh start.

His new life is going well until Matt returns to his cottage to discover a grim warning on his doorstop. The message is clear – Leave now and go back to London.

Not wanting to give up his new life, Matt eventually discovers that there has been a 200-year-old feud between his family, the Trevelyars, and another local family, the Penhallows.

When Matt learns that one of his ancestors burned down a barn belonging to the Penhallows, and that a child died in the fire, he understands why his family name is mud. But why is Matt paying for the sins of his ancestors now? And is there more to the feud than meets the eye?

The Feud starts with a fire many years ago, that resulted in the death of a young boy…..Kenver believes he knows who’s responsible…..

Then we are taken to the present day and Matt Trevelyar has left London to move to Cornwall and a new job as a teacher. A new start, a new life….

He arrives at his rented home, Badgers Holt, only to find a badgers head on a pole and a written warning…to F*** off back to London. Unsettled he calls the local police, but feels a waste of time…

He then meets the beautiful Lavender and is smitten….but is she interested ? Or is there something odd in the way she looks at him….her Grandmother, Morvoren believes he is an evil Trevelyar…..and plots to make him leave the village….anyway she can…

This is an easy read, with some nice twists and a clever plot…I enjoyed the relationship between Matt and Lavender, the doubts and secrets. It shows how perceived hurts can fester over years, all that emotional baggage and hate bring nothing but sadness, loneliness and pain…a very engrossing read….

Thank you to Bloodhound Books for the opportunity to participate in this blog tour and for the promotional materials and a free copy of the ebook  in exchange for my honest, unbiased review.

Amanda has written since she was a child, but never imagined that her words would be published, given that she left school with no real qualifications of note apart from an A* in how to be a nuisance in class. Nevertheless, she returned to education when her daughter was five and eventually became a history teacher. Then in 2010, after many twists and turns, the dream of becoming a writer came true when her first short story was published. Amanda has written many short stories and has six novels currently published.

Amanda grew up in Sheffield but now has realised her lifelong dream of living in Cornwall and her writing is inspired every day by the dramatic coastline near her home. She has sketched out many stories in her head while walking the cliff paths. Three of her mystery/suspense novels are set there, Somewhere Beyond the Sea, Summer in Tintagel and the Behind the Lie. Rip Current is also set in Cornwall and will be published by Bloodhound Books in April 2018.
Amanda, known to many as Mandy, spends far more time than is good for her on social media and has turned procrastination to a fine art. She can also usually be found playing on the beach with her family, or walking the cliff paths planning her next book.

3 responses to “The Feud by Amanda James – Book Review”