The Merchant Of Menace by Richard T. Ryan – Book Review 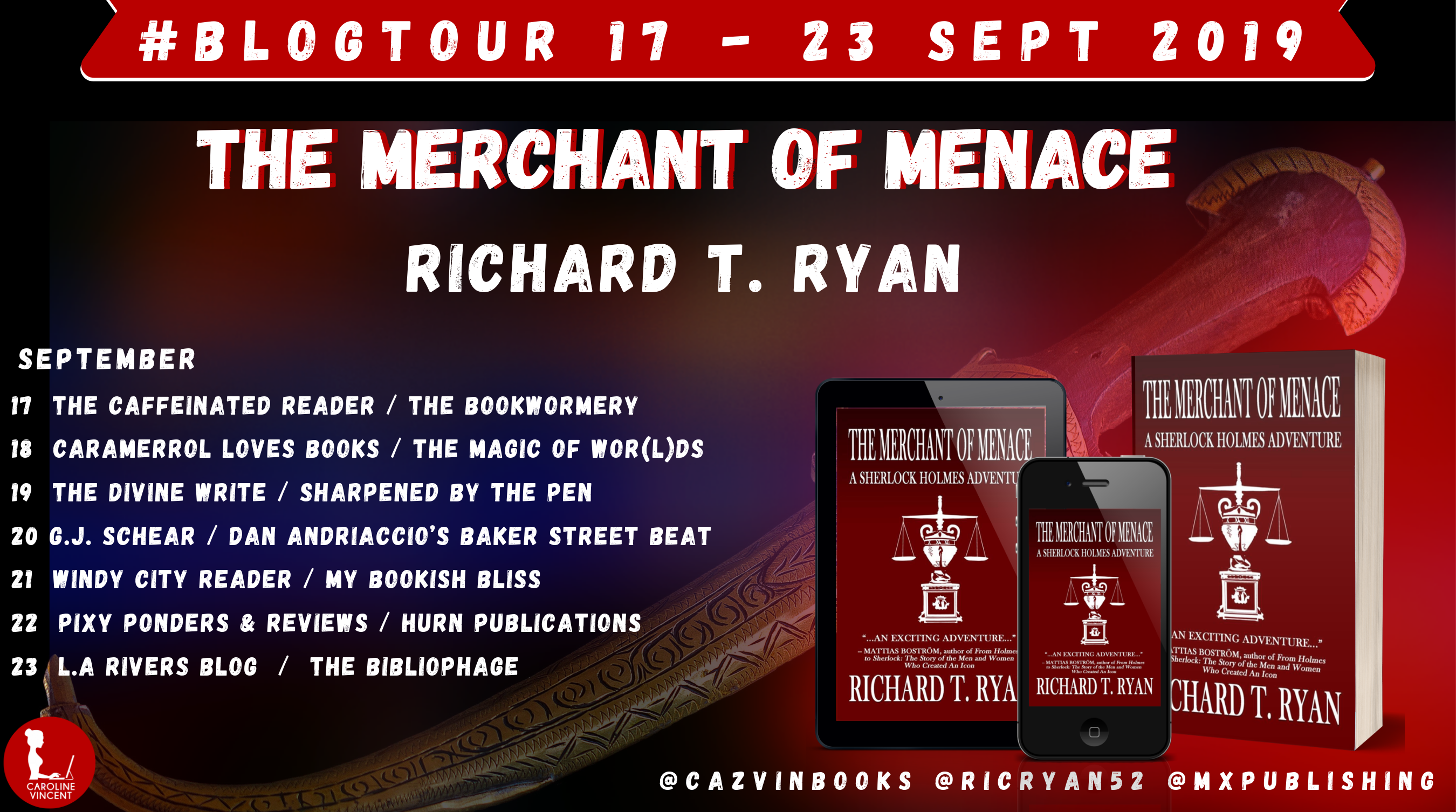 Reluctantly, Sherlock Holmes agrees to assist Inspector Lestrade who is being hounded by an obnoxious nobleman whose jewel-encrusted dagger has gone missing. However, what Holmes initially believes to be a simple theft turns out instead to be his first encounter with a master criminal, who is as ruthless as he is brilliant, and whom Watson dubs “The Merchant of Menace.”

Soon Holmes finds himself matching wits with a man who will steal anything – if the price is right. Moreover, this thief will go to any lengths, including blackmail and murder, to achieve his desired goal.

As Holmes comes to understand his adversary, he also begins to realize he can only react to the Merchant because he has no idea where this criminal mastermind will strike next. All Holmes knows for certain is the Merchant seems to specialize in priceless, one-of-a-kind articles. Will that be enough information for the Great Detective to outwit his foe?

From the British Museum to the Louvre to Blenheim Palace, Holmes finds himself in a deadly game of cat-and-mouse. Set against the backdrop of early Edwardian England, the Great Detective and his Boswell encounter an array of luminaries from the Duke and Duchess of Marlborough to a young Winston Churchill.

For fans of Conan Doyle’s immortal detective, the game is always afoot. However, this time around Holmes must try to bring to justice a villain who might well be the next Napoleon of Crime.

#2 The Stone of Destiny ​​bit.ly/StoneofDestiny

#4 The Merchant of Menace ​bit.ly/MerchantofMenace

Someone has stolen a jewelled dagger, a jambiya, from the home of Lord Thornton. A suspect is arrested but then released without charge, and at a loss, Inspector Lestrade approaches Sherlock Holmes for help…..

I have read many of Conan Doyle’s Adventures of Sherlock Holmes and this is a worthy addition to the canon. It has the same cadence to the language and many of Holmes quirks and characteristics, even his tobacco in a Persian slipper and his penchant for disguise.

Some light humour, historical references and a worthy adversary for Holmes, and of course, his friend Dr Watson.

So well written and a joy to read a new addition to the Sherlock Holmes library…..brilliantly entertaining.

Thank you to Caroline Vincent and Bits about Books for the opportunity to participate in this blog tour and for the promotional materials and a free copy of the ebook  in exchange for my honest, unbiased review.

A lifelong Sherlockian, Richard Ryan is the author of “The Official Sherlock Holmes Trivia Book” as well as a book on Agatha Christie trivia, and his series, the Sherlock Holmes Adventures, now consisting of four books, all available from MX Publishing, London.

Richard Ryan obtained his master’s degree from the University of Notre Dame, where he majored in medieval literature; he is a die-hard fan of the Fighting Irish — it doesn’t matter what sport. He has been happily married for 40 years and is the proud father of two children.

One response to “The Merchant Of Menace by Richard T. Ryan – Book Review”