Mid 1970s. Ex-Praetorian Aurelia Mitela is serving as Roma Nova’s interim ambassador in London. Asked by a British colleague to find his missing son, Aurelia thinks it will only be a case of a young man temporarily rebelling. He’s bound to turn up only a little worse for wear.

But a spate of high-level killings pulls Aurelia away into a dangerous pan-European investigation. Badly beaten in Rome as a warning, she discovers the killers have kidnapped her life companion, Miklós, and sent an ultimatum: Back off or he’ll die.

But Aurelia is a Roma Novan and they never give up…

Set between AURELIA and INSURRECTIO in the Aurelia Mitela Roma Nova adventures. 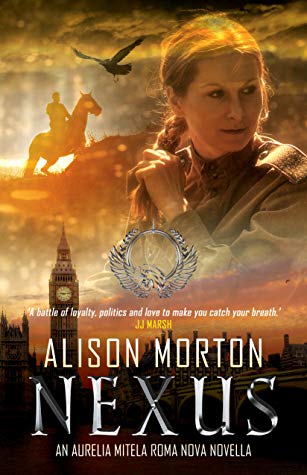 Set in an alternate world, where the Roman society still exists….with powerful women in charge.

Aurelia, Countess Mitela is in London for a while as an ambassador, when Harry Carter the Assistant Secretary General to the British Foreign Ministry asks her for a favour. His son, Tom, has gone missing again so could she help find him.

She is recalled suddenly due to murders of important men in Europe, but Miklós is staying behind to search for Tom….

At the same time, Her daughter, Marina is being bullied by a girl at school……Linda Casely……sister to John Casely a violent criminal…

Aurelia has compassion but she is also strong and principled, as an ex-soldier she takes no nonsense and will uphold law and order at all costs.

Will she be able to find Tom? What is the link to John Casely?

This may be a relatively short novella, but there is no lack of substance to this tension packed thriller with great characters and twisty story. Nice to catch up with Aurelia and Marina is growing up to be just as feisty. Brilliant.

Thank you to Alison Morton, The Author for the opportunity to read this for free. This is my honest and unbiased review.

you can buy a copy here

Even before she pulled on her first set of combats, Alison Morton was fascinated by the idea of women soldiers. After six years in a special communications regiment, she left as a captain, having done all sorts of interesting and exciting things she can’t talk about, even now…

The mosaics at Ampurias (Spain) and their creation by the complex, power and value-driven Roman civilisation made her wonder what a modern Roman society would be like if run by strong women.

Now, she writes Roman-themed alternate history thrillers with tough heroines, tends a Roman herb garden and drinks wine with her husband.(Courtesy of Goodreads)