Devon And Hell : Four Seasons By The Sea by Karen Wheeler – Book Review

One woman, one dog and a disastrous move to Devon. Throw in an estranged mother who has just been diagnosed with dementia and the result is a brilliantly written comic memoir with more ups and downs than the South West Coastal Path.

This is not your usual tale of ‘I moved to a chocolate-box cottage by the sea and lived happily ever after’. Instead, it is a powerful and gripping story of relocation – and a maternal relationship – gone wrong.

Ultimately this is an uplifting, feel-good story as Karen triumphs over adversity and finds new peace following the death of her mother.

After eight years of living in France, Karen Wheeler returns to live by the seaside near Budleigh Salterton on East Devon’s Jurassic Coast. Plum Tree Cottage, with its full set of cottagey credentials – climbing roses, old Georgian floorboards and a dove-grey Aga – is a classic case of love at first sight. But the disasters begin before she has even moved in.

Wheeler is left reeling when Plum Tree Cottage reveals a very unwelcome surprise. She then receives the shocking news that her mother – a cold and cruel woman from whom she has been estranged for most of her life – has been sectioned.

Living the dream by the sea rapidly descends into a living hell with each day bringing a new onslaught of domestic and mother-related disasters. Convinced that her cottage is unlucky, Wheeler consults Harsh Jain, a practitioner of vastu shastra – the Hindu equivalent of feng shui.

Back comes a report that would have most people not just moving their gas stove – which Wheeler discovers is ideally placed for ‘burning up blessings’ – but sticking their head in it. Harsh predicts that the cottage will bring a host of problems and ‘unwelcome surprises’. The doom-laden report finishes by warning the author – who is planning to walk the Jurassic Coast Path  – to ‘Please be avoiding high places’.

One by one, Harsh Jain’s predictions come true – in surprising detail. Wheeler is forced to face up to the childhood she has long tried to ignore and is literally taken to a cliff edge before the book’s end. But then, in a heartwarming twist, she makes a surprising discovery that changes everything. 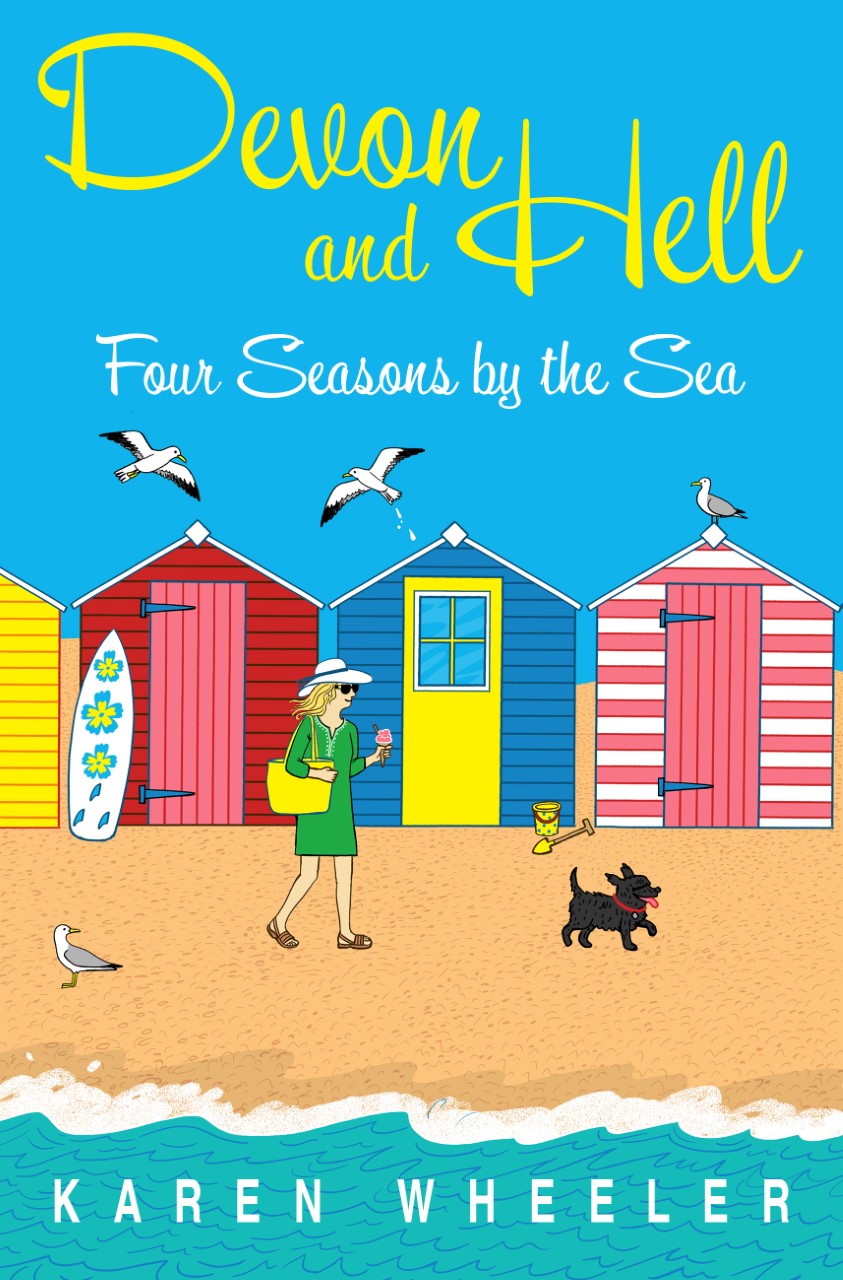 Carrie has moved from France to Devon, she has bought the beautiful Plum Tree Cottage and is looking forward to moving in with her beloved little dog Biff…….but Rats put the kibosh on her plans….

Then she gets a call her mother has been sectioned…..and so the drama begins.

This is full of humour, hurt and chaos, it’s so funny in parts and then so emotional too.

This really struck a chord with me, as my childhood was similar and now my mother has dementia and is in a care home after breaking her hip….so I know the feelings Carrie was going through.

I loved the friendships she made, her flustered panic, flip flops and her paint dealer all brought to life by Karen Wheeler’s creative writing……lots of laughs and a few tears too. A very engaging, heartwarming read.

Karen Wheeler is a former journalist and national newspaper fashion editor who has successfully published five comic travel memoirs about her life in France, starting with Tout Sweet: Hanging up my High Heels for a New Life in France, which made it to #1 in Amazon’s travel writing book chart.

She wrote for the Financial Times for over fifteen years and is a former fashion editor of the Mail on Sunday. She studied Modern History at Kings College, London University and worked briefly at Sotheby’s art auctioneers before embarking on a career in fashion journalism.

During her career she has interviewed many of fashion’s top names including Tom Ford, Karl Lagerfeld, Giorgio Armani and Calvin Klein. Her work has also appeared frequently in Vogue Japan, You magazine, the Daily Mail and Sunday Times Style.

Originally hailing from the north of England, Karen is one of the many ex-pats now returning to the UK – as she points out the food is much better here. She has run holiday cottages, knows the Farrow and Ball colour chart inside out, never turns down a glass of pink champagne and lives near Budleigh Salterton in East Devon with her boyfriend and her dog Biff.

You can read more about her life at http://www.toutsweet.net – the blog she started while living in rural France; and follow her on Twitter at @mimipompom1

Karen has great interview experience and is available to write feature pieces.

Earlier this year the Daily Mail published a moving feature on her relationship with her bipolar mother: https://www.dailymail.co.uk/femail/article-6676089/Writer-shares-story-cruel-childhood-reluctant-deathbed-visit.html

Devon and Hell will appeal to fans of Eleanor Oliphant, as well as the armchair renovators who enjoy watching Grand Designs, Homes by the  Sea and Amazing Spaces and to the large number of Brits who are moving to the coast or taking ‘staycations’ in the UK. Devon and Hell is set in Lympstone, an aspirational and newly fashionable area of Devon, which was recently shortlisted in Penelope Keith’s C4 series, Britain’s Best Villages: Village of the Year 2017 and recently saw  the opening of Lympstone Manor, by Michelin-starred chef Michael Caines.

Devon and Hell: Four Seasons by the Sea is the omnibus version of a four-part series of mini e-books, launched earlier this year as Dream Cottage: Four Seasons in Devon and released in accordance with the seasons. All of the books were designated Amazon ‘Hot New Releases’ and made it into the top five in travel writing.

Devon and Hell: Four Seasons by the Sea will be released in e-book format on 28th October 2019, £9.99, by Sweet Pea Publishing. The print version will be published in October 2020.

3 responses to “Devon And Hell : Four Seasons By The Sea by Karen Wheeler – Book Review”