A little before midnight on May 30, 1997, fourteen-year-old Brandy DuVall waited at a bus stop in the Denver area for a ride back to her grandparents’ home after spending the evening at a friend’s home. She was wearing a bright-red Chicago Bulls jersey bearing the number of her favorite player, Michael Jordan.

It was the shirt, a favorite of the Bloods gang, that attracted the five young gang members in the car that circled the block and came back to where she stood. Why Brandy got in the car that night would remain an unanswered question. Was it voluntary? Was she abducted?

Whatever the answer, the consequence was an unimaginable nightmare of torture, rape and murder at the hands of a vicious Denver street gang, particularly “Pancho,” a violent psychopath, and other members of the Deuce-Seven. The crime, the investigation, the betrayals and deals cut with the devil, and the subsequent court cases, including four murder trials and two death penalty hearings, tore apart families, and affected all who were caught up in the brutal crime and its aftermath.

Now, twenty years after he first wrote about this horrific true crime, New York Times bestselling author Steve Jackson returns with NO ANGELS, a gripping narrative delving into the circumstances that would forever change the fate of Brandy, two previously inseparable brothers, and the mothers who sat on opposite sides of the courtroom and yet shared a common grief. 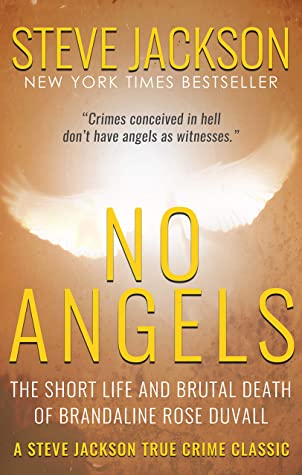 Brandaline (Brandy) Rose DuVall was 14 when she died. She had been raped, tortured and stabbed multiple times. Those responsible were members of a street gang in Denver.

This is the true story of an horrific murder, but it’s also the story of the effects this horrific and brutal murder had on Brandy’s family and friends, and the families of the young men responsible.

No Angels tells of these gang members’ early lives and how they got drawn in to gang culture.

The excellent writing by Steve Jackson really brings to light just how many people are affected by this violent crime and its aftermath. It gives an emotive depth to a true crime story.

Thank you to Natalie at Wild Blue Press for an acopy of No Angels. This is my honest and unbiased review.

3 responses to “No Angels by Steve Jackson – Book Review”